One of the great improvements to Adobe Creative Cloud 2014 was the enhancements to Adobe Add-ons (formerly extensions). These great additions can greatly increase your creativity and workflow with a simple download.

The link below shows an example of one of my favorites- the Before and After slider in Adobe Muse.

Instead of having the images on separate pages or a slideshow, this interactive add-on really adds an eye catching interface on your site. 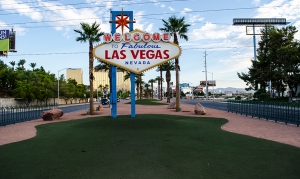 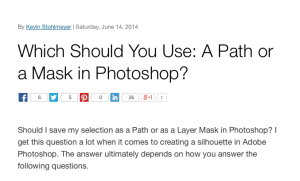 I’ve been remiss in letting you know about a new article I recently wrote for lynda.com on choosing which silhouette technique to use – a mask or a path in Photoshop. It’s a great discussion on when to use what and why. You can read it (for free) by clicking the link below. I’d love to hear from you on what you use and what you feel works best.

On June 18 Adobe announced the latest version of Creative Cloud – CC 2014. This marks the first anniversary of Adobe going to a cloud-based format for their software and the first major product update across all applications. But what does this mean for you? How will this impact your workflow? No worries we are here to help.

First I wanted to address the biggest question we are hearing from users.

“CC 2014 installs next to my existing CC software and doesn’t replace it. Now I have two versions. Why did they do this? Where are my plug-ins?”

The easy answer is versioning. Adobe plans to release a major update each year (this is 2014) as a benchmark which updates for OS compatibility, plug-ins, drivers, etc. In order to update the software but not have it also eliminate compatibility with your current system, it installs a new app next to your current version.

With this in mind, here are a couple of tips. First, do not uninstall your current software until you install the new version AND open it. Make sure it works on your system first before removing the older version. Second, your third-party plug-ins (Nik, OnOne, DTP Tools, etc.) will not transfer over automatically. However it is a simple solution – go to your plug-ins folder from your old software and copy your third-party plug-ins to the plug-ins folder for the 2014 version.

For more questions and answers – check this link for the Creative Cloud Install Help.

Next lets take a look at some of the highlights from this update.

Photoshop has updated several existing items including content-aware, Perspective Warp and Smart Objects and has also introduced some new features. You can now utilize Typekit sync and missing font support AND search, preview or replace live in your document using the character panel. You now have a new selection menu option, Focus Mask, which allows you to select in-focus areas of your image. And you now have “smarter” smart guides which not only align but also calculate distances in pixels between objects for precise layouts.

Illustrator now features Live Shapes which gives you corner control in the Transform panel as you are creating and editing rectangles. You also have a Pen Tool Preview. This may be a familiar addition for Photoshop users, also called the “Rubber Band” preview. The hidden gem which has really caught my eye however, is the Pencil Tool update. This tool has been updated and improved again and now creates smooth paths without an overwhelming amount of points.

InDesign has Table enhancements allowing you to rearrange rows or columns of information using drag and drop. InDesign also picked up Color Groups from Illustrator, allowing you to group and organize your color swatches. The biggest addition for me has to be the ability to create a Fixed Layout EPUB with interactive elements, audio, video and more all with a simple export. ID also caught up to PS and AI with seamless updating, more sync options and Behance integration.

Dreameaver is continuing to make life easier for developers. With improvements like Element Quick View, Live View Property Inspector and Live Insert you can do so much more inside Live View than ever before. Editing content, inserting HTML elements and clean CSS generation are all available while viewing the Live version of the site. These updates are making DW more accessible for those learning HTML and CSS.

After Effects and the rest of the video segment had a huge announcement at NAB this past spring in Las Vegas, and now you have all their cool toys. Keying effects are enhanced to preserve fine details on compressed or poorly shot footage. Flexing masking options are more intuitive and similar to Photoshop, allowing you to apply effects to specific areas without the need for additional layers. There is also more support for Dynamic Link between AE and Premiere Pro.

Premiere Pro has simplified your workflow by bringing some of the commonly used tools from SpeedGrade and After Effects directly into Premiere. You now also have Master Clip effects, allowing you to sync all your clips in a sequence to match a designated “master” clip. Live Text Templates allow you to modify text from AE compositions without leaving Premiere. There is also a slew of new formats supported including AS11 for broadcast, Canon RAW, Cinema DNG and more.

Mobile Apps are becoming more integrated into the Creative Cloud. As of June 18 Adobe released Sketch, Line, Photoshop Mix and Lightroom Mobile (now available on iPhone). Look for another blog post to find out more about them individually, but the biggest news is these are all FREE. Yep. No charge, zero, zip nada.

Finally, something big was also announced yesterday and while it may not effect you or your workflow directly, it is huge news for the future of your software. Adobe will be releasing the Creative SDK (Software Development Kit) free and open to the public. This means that companies will have greater access to CC features to create new additions or better serve you with plug-ins for your favorite apps.

If you have any questions regarding CC 2014 or want to learn about the new features in a hands-on setting, hit me up! Go to C2’s website to view our CC Upgrade Class which features all updates from CS6 – CC 2014 or our new CC 2014 Upgrade Class which is for those familiar with CC but looking to update your skills with the latest edition.