The evening of day 2 came to a head with the always anticipated MAX Sneaks session. This year Ben Forta was joined by Joseph Gordon Levitt (@hitRECordJoe). It was a nice change of pace to see the focus be solely on the tech and presentations, with limited (lacking) interaction between Levitt and Ben. An interesting observation is the presentations all ran short of the 5 minute limit with no one having to get “the hook”. I have to say I did miss the antics of last year’s with CHiPs Erik Estrada coming out to “arrest” the presenters who ran long.

That being said, the presentations for the most part were amazing. First up was special guest Russell Brown talking about the RB@MAX Kaiju Project and presenting the winning poster to the audience. He was a hit with his trusty steed “Rusty” hopping along to the music on stage.

Next were the presentations by Adobe engineers and the interns who developed some pretty cool ideas. My favorites were Project Para, Defog (hit of the show in my opinion), Gap Stop (crazy video editing) and Photoshop Design. Check out the videos below for the sneaks.

The evening ended with the ever popular MAX Bash featuring Kings of Leon as the headliners. It was great to catch up with old friends, make some new ones and enjoy the food, beverage and music. I wish I could say I closed the joint, but I had early morning commitments the next day so I had to behave. 🙂 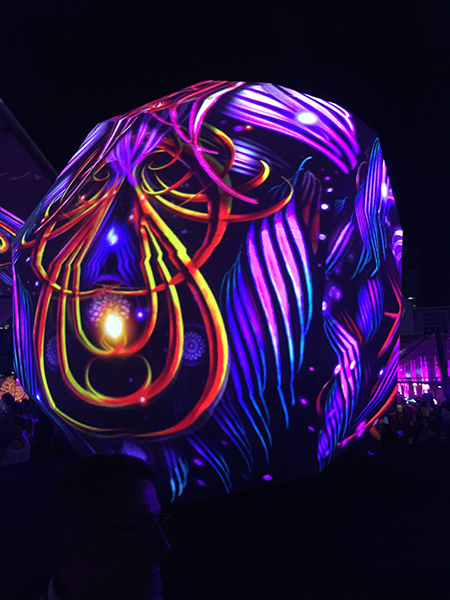 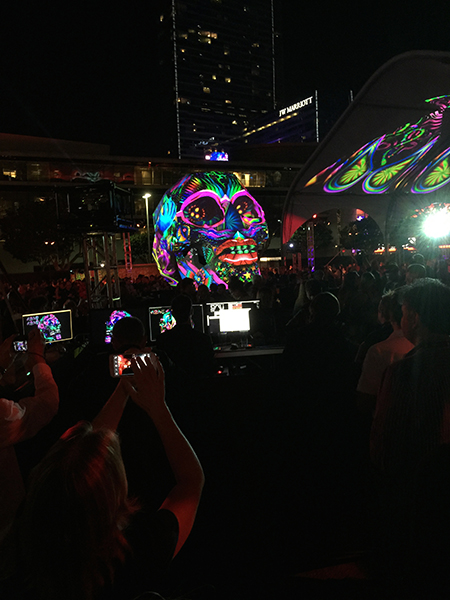 The Day 2 Keynote at MAX was all about “Inspire”- having special guests take the stage and talk to us about their work, their life and how creativity has impacted them in both.

First up was Ami Vitale, a Nikon Ambassador and photojournalist. Her images from India, Africa and other exotic locations were amazing. She found the beauty in life even during civil unrest and wars. Her photography was amazing and that was before she showed us baby pandas in China.

Next up was illustrator Jason Seiler, who talked about his work as a political cartoonist, character illustrator and portrait artist. He broke down his famous Time Magazine Man of the Year illustration of Pope Francis. While his work may appear traditional, he does work mainly in Photoshop. But don’t ask him which it is, it angers him! “The media shouldn’t matter or get in the way, the subject and the results is what counts”.

After Jason was a very special guest, the one and only Weird Al Yankovic. It was an odd setup – two chairs, an interviewer asking random questions and Al giving very brief and blunt answers. His biggest applause came when he talked about “Word Crimes” and how his latest album had hit #1. He was very subdued but open during this “conversation”.

Finally, Filmmaker Lee Hirsch took the stage to talk about his work and his latest film “BULLY” which has evolved into “The Bully Project”. This was the most emotional presentation I have seen at MAX. After previewing the film, Lee asked everyone to stand and close their eyes. He then asked anyone who has never been bullied to sit down. As we opened our eyes and looked around, no one had sat down. It was a very powerful image. Adobe also announced that they will be partnering with The Bully Project to help end bullying including a virtual collage, and making donations during the keynote for every tweet. Adobe had raised over $20,000 just that morning from this effort.

Next up was the show floor at the MAX Pavilion, here you could meet the product teams, talk about features and software, try out the new updates and more! My home base was the Community Lounge in the center of the room. I also participated in several Behance Portfolio reviews and even answered questions while staffing the Photoshop/Lightroom booth along Adobe team members. It was a whirlwind of energy, from the Adobe Youth Voices mural with Lee Hirsch making a traditional collage for The Bully Project, to TypeKit having a cool retro lounge with examples of fonts and font books to review. There was even a CDW bus complete with Flux Capacitor and Root Beer stand (featuring Milwaukee’s own Sprecher root beer!).

So one of the fun opportunities that came out of going to MAX was the opportunity to exhibit some of my artwork at the Surf Club Gallery in Hollywood curated by former Adobe employee and cool cat Rick Miller. The event featured artwork from local tiki artists and Adobe community members. It was a lot of fun and a great time was had by all including a very swank birthday cake for Rick.

Now, onto Adobe MAX Day 1 (Day 4 for me). Tuesday marked the first Keynote address by Adobe. It was very cool to see new faces showing off the new features of Adobe’s mobile apps including updates to Line and Sketch. I’ve already found real-world uses for Adobe Shape and Premiere Clip so those details will be coming in a later post. All the apps are FREE to use and connect seamlessly to your Creative ID – which was the underlying theme for the keynote. All your assets, apps and files are synced through your Adobe Creative ID. This new structure and communication between all these inputs either through the new CC Library or via my CC sync have been a joy to work with and have already made me more efficient even when on the road.

Wow. It’s already been almost a week since I have returned from Adobe MAX and my brain is still spinning from the experience. I thought I would share with you some of my thoughts and musings about MAX and the Russell Brown at MAX pre conference – The Kaiju Project.

I arrived on Friday to assist with the setup for the pre-con and was happy to see fellow Kaiju ranglers Jennifer Willis, Monika Wolff, Maria Masiar and my buddies Sean Teegarden and AJ Wood. I was also blown away at the sight of one of the THREE Kaiju monsters created by the Stan Winston School of Character Arts.

Saturday started off like any other weekend morning – dressing up in costumes, watching Rayce Bird convert Maria into the Kaiju Princess, Russell mounting his steed and the attendees rolling in for a whirl-wind three day workshop.

The event was focused on using mobile devices to capture images and ultimately create movie posters based on the Kaiju theme. Special guests including Julieanne Kost, Corey Barker, Lisa Carney, Chris Converse and more gave tips and tutorials on how to enhance and create the posters or even animate them using Edge Animate. 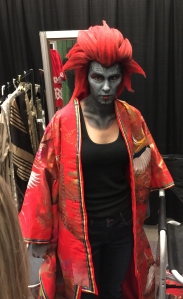 The finished Kaiju Project Posters shown at MAX Sneaks with Russell and “Rusty”.

In the end this sold out session created some stunning works of art which were on display during the MAX conference and also highlighted during MAX Sneaks on Day 2.

This was by far the biggest Russell Brown event I have ever been a part of. It was inspiring, entertaining and overwhelming at times with the shear size of the models! I look forward to whatever the mad genius comes up with next including hearing his ideas on his next big event ADIM 15 – “Shakespeare on the Sea” . But for now, Russell has rode off into the sunset on his trusty stead “Rusty”.

Coming up next – Gallery Showings and MAX Day 1 Recap!